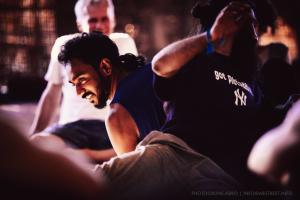 Guru Suraj is an artist with a background in visual and movement arts, dedicated to researching, organising events, facilitating, and performing on the cross-section of different art forms.

Guru has a Bachelor’s Degree in Painting from the Government College of Fine Arts, Chennai and a Master’s Degree in Philosophy of Yoga from Tamilnadu Physical Education and Sports University, Chennai. The curiosity of movement has led him to years of study of Contact Improvisation (improvisation movement  that fosters a physical and non-physical connection with others while moving) and various somatic techniques, which investigate the mind-body connection as ways to survey one’s internal self.

Together with other first Indian practitioners of CI, he founded Contact Improv India (CII) - an organization that focuses on teaching and performing CI throughout India, and making this art form accessible to everybody. Fourteen years of practicing CI has brought immense depth in sharing this form as a platform for cultural exchange, and experience in engaging a wide range of population in India.

Guru’s main focus in his artistic practice is discovering different ways of interacting with each other that are not constrained by conventions or traditions. In his teachings he bridges both the radical and the traditional. He invites to strengthen creativity, discipline curiosity, and learn through sharing different modes of communication that are beyond verbal language.

In curating performances, he builds a foundation that allows the work to emerge from the common ground shared by participants. At the core of his carefully crafted pieces is the experimentation that bends the norms and boundaries of the arts, allowing the new shapes, encounters, forms, and connections to develop on their own.

The embodied experience of the performance plays a big role in his work, challenging the traditional approach towards the arts and becoming a fertile ground for the audience to shape their own experience and blurr the audience-performers differences. His art touches, impacts and invites for reflection in ways that are unexpected and continuously evolving.