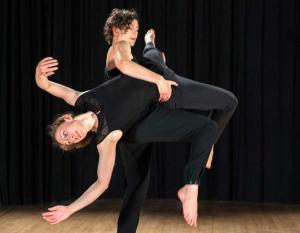 Before professional dance, Delia worked as an actress in film and television. After graduating from Main Dance Professional Training Program in 1994, she embarked on an extensive career in Modern Dance. She began training in Contact Improvisation in 1991 and has been a member of EDAM; Vancouver’s Contact Dance based company, since 1997. She has travelled across the globe with dance companies: Battery Opera, Trial and Eros, Kinesis Somatro, and MACHiNENOiSY. She has performed locally with, amongst many others, EDAM Dance, Lola Dance, Trial and Eros, Co. Erasga, Tom Stroud of Winnipeg Contemporary Dancers and Helen Walkley. In 2006 she officially joined forces with her long time friend and creative partner Daelik to co-Direct MACHiNENOiSY Dance Society. Delia’s independent creations, include, Dissolve, Little birds, Flower star flowers, Twister, Strange Queen and He was swimming the other way. She has been practicing and performing the art of Contact Dance for over 15 years. She teaches contact and Hatha yoga and is the mother and stepmother to two beautiful boys.