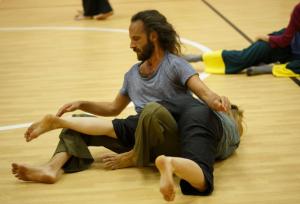 Asaf has practiced contact improvisation (CI, a contemporary dance technique) as well as other improvisation techniques (Butoh, release, tuning score) since 1994. He Studied in Tel Aviv, New York, Paris and Boston. Among his most influential professors are Steve Paxton, Kirstie Simson, Lisa Nelson, Min Tanaka. Since 2000, he has taught in Europe, in the USA, in Buenos Aires and in Israel. In 2012, he organized an international conference in Paris around CI and ‘mindfulness’ (http:// mindthepoint.wordpress.com/). He is the co-founder of the ME-lieu collective (2015). Since 2016 he is a certified Rolfing® practitioner. Asaf has been co-leading with Matthieu Gaudeau, since 2016 the F.A.R. nomadic somatics school, a
trans-somatic (Feldenkrais, Alexander, Rolfing and CI) experiential research group. He is also a practicing cognitive neuroscientist at the CNRS where he has been studying language and dance (labodanse.org).