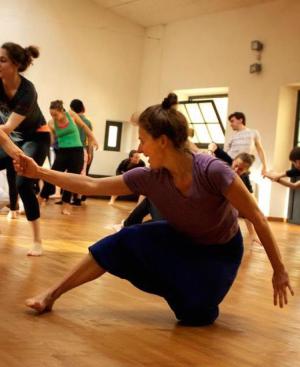 Claudia Schnürer is a physical performer, movement teacher, therapist and bodyworker, born and based in Germany. 2016 to 2018 she had been a fulltime faculty member of the physical theatre department at Folkwang University of Arts in Essen, Germany. 2009 to 2015 she had been the Director of Undergraduate Theatre Studies and Core Faculty for Movement at the Academia dell´Arte, Arezzo, Italy. In 2004 she completed the four year professional training of the Feldenkrais-Method in Lewes, England, and in the same year she got her diploma as a „non medical therapist“. She graduated from the Berlin circus school die Etage in the mid nineties. Since then she has been working as a multi-skilled performer in different formations for theatre, circus projects nationally and internationally – up to now touring through 16 european and southamerican countries, as well as in India. In the late nineties she started teaching acrobatics and eventually organic acrobatics, Feldenkrais and Contact Improvisation for actors.