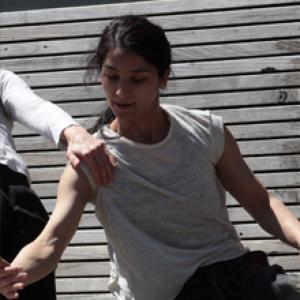 Funda Gul is a Native of Ankara, Turkey. Funda has studied various movement disciplines beginning with Aikido in 2005 eventually earning her Black Belt. She then continued her movement journey and earned instructor certifications in Systema and Yoga. Funda teaches Contact Improvisation at Movement Research and continues her movement studies in House Dance, Parkour, Parcon, Authentic Movement, Tai-Chi, Qi Gong, Capoeira Angola, and Archery. Funda applies her martial arts skills into her movement teaching, in particular to Contact Improvisation. Her training in Yoga allows her to easily individualize the practice at hand according to students' needs and abilities. This approach helps Funda create an all-inclusive space for practicing movement. Also, her main inspiration for movement follows the idea of “Function creates the form,” the idea that she has discovered during her martial arts and yoga training. In addition to being a talented mover, Funda also holds a Ph.D. in Mathematics from Stevens Institute of Technology.