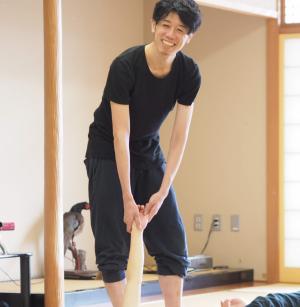 Born in Tokyo in 1980. Ryuhei started contemporary dance and CI in Japan when he was a university student. He graduated from Keio University with a bachelor of policy management in 2003. After that, he began his career as an independent artist. In 2004, Ryuhei founded AAPA (Away At Performing Arts) and his works have been presented in Ohono Kazuo Festival (2009) and Koganechou Bazzar (2010) as well as Odoriniikuze!! II (2011).

Since 2013, AAPA has been running “Hinodecho Danchi Studio” in Kitasenjyu, Tokyo, and Ryuhei have been exploring and developing movement class program with Minori Nagai, in which anyone can access and deepen their own body and dance.

Ryuehi Uemoto and Minori Nagai have been teaching regular classes and CI workshops as well as hosting CI lab., jams, workshops from different disciplines such as martial arts, theater, mask and juggling by collaborating with various artists. they have been invited to “Asia Pacific Impro! 2” in Malaysia (2015), "Touch" CI festival in China (2018) and "Water and Land Contact Festival" in Thailand (2019).