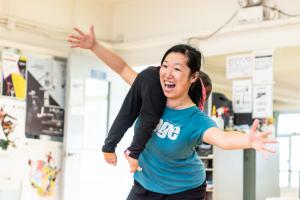 Mimi Lo is the Artistic Director of DanceAbility Hong Kong. She is certified teacher of DanceAbility International and ContaKids International. Graduated from the Hong Kong Academy for Performing Arts, major in choreography and dance directing. Recently, focus on contact improvisation, somatic practice and Argentine tango.

Mimi started her dance teaching since 1996. She was the Teaching Artist of "Leap!" , the children creative movement program of The Robert H.N.Ho Family Foundation, and received the teacher training in Cloud Gate Dance School in Taiwan. She was the choreographer of the musical "The Awakening" of L Plus H Creations Foundation, the production was filmed as the documentation "My Voice, My Life”.