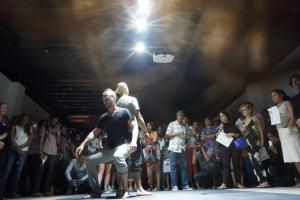 2003 - Mixing disciplines performing at Dance en Vol in Brussels Belgium as a DJ mixing originals to the movement on stage, and dancing the choreography of Daeilik's piece " Body Building" 2005 - Apprentices and performs with Peter Bingham’s company in the remount of his piece "Born Naked, Died Blond" 2004-2006 - (2004 Vancouver, 2006 Calgary, St. John, NF) Martha Carter's IDUB (Interactive Digital Urban Ballet) where skills as a Beat Boxer, DJ, Producer, Rapper and Dancer where all showcased in this interdisciplinary multi dance style piece.2007 - In Martha Carter's " RI'ZILYENT" Composing music, Dj’s live on stage as well as dances, Shadbolt Centre for the Arts, Burnaby. B.C. 2005-2006 - Martha Carters "The Spell Remains" (2006), which is an exploration of club music with modern dance 2005 - Shadbolt Centre for the Arts, Burnaby 2006 - Dancing on the Edge, SFU, Vancouver East Cultural Centre. 2008 - Performing a structure-improvised duet choreographed by Peter Bingham. The piece is called " The Body Eclectic" 2008 - Performing with Kesseke Yeow's African dance group West meets West for the performance “The kiss of Africa”. Noteworthy is that he is the only non-African invited to dance. 2009 - Apprentice with Zab Maboungou’s company Compagnie Danse Nyata Nyata and to be in a new dance creation in May 2010 2010 - Martha Carter's "Heat the Street" an interactive performance for the Vancouver 2010 Olympics. 2010 - Zab Maboungou, Compagnie Danse Nyata Nyata "Montréal by Night", performed at the SAT in Montreal. 2011 - Prime Dance, "Flight of the Loon" , a showcase of Caribbean Traditional dance.First performance with West-Can (a Montreal based Caribbean Folk performing Company) 2012 - "Collide" a creation that is an exploration of Contact dance and folkloric Caribbean dance as part of the Makeda Dance Institute in Port of Spain ,Trinidad and Tobago 2012 - “CHIMEN CROISÉS" by Ekspresyon , a Haitian contemporary group based in Montreal. 2012 - “Terabyte citizen" a solo presented in Trinidad Contemporary Dance festival at Coco Dance festival , the performance was made possible by funding from Conseil des arts et des lettres du Québec 2012 - “Yamayo” a creation by Julio Hong that fuses Contemporary dance and Traditional Afro-Cuban dance, Fire Hall Theater, Vancouver. 2013 - "Numb" a duet presented at Coco Dance festival 2013 - Makeda Thomas Dance and Performance Institute New Waves! Commission Project presented “The Strange Tale of an Island Shade" by Trinidadian choreographer, Sonja Dumas company Continuum at the Dance Studio at the Academy for Performing Arts, UTT 2013 “The Strange Tale of an Island Shade" is remounted in Jamaica at the Edna Manley College for the Rex Nettleford Arts Conference. 2013 - "Numb" This piece was also remounted with a Jamaican dancer as a creative collaboration at the Rex Nettleford Arts Conference in Jamaica. 2014 - Performing at the annual Prime Minister's Best Village in Trinidad with Malkick Folk Performing group in the categories of “Calypso Dance”, “Local Interpretative” and ”Indigenous Dance” this was the end result of a self directed research project of Folkloric dance of Trinidad. 2014 - “Striking” - Returning with another creation to the Coco Dance festival . This large group piece explores many social issues as well as involving multimedia video. 2015 - “Identty” - Creating and debuting this dance video at the Annual Coco Dance festival. This piece explores identity and how it can change. Honoured with “Choreographer’s Award” by the Coco at this years festival as well. 2016 - “LeFT” - Metamorphosis company invited Cino as a guest Choreographer in the annual show. The piece was so well received that it was asked to be remounted in the Annual Contemporary dance festival Coco Dance. 2017 - “Transitions and Impermanence” - Trinidad Contact Improv group creates a structures improvisation for the Annual Coco Dance festival. 2017- “Carnival Remix” - Performing traditional masquerade characters in this modernized performance of them. 2017 “Fire Ceremony” - Performing ritualistic dance with fire to open the Stage at New Fire Festival 2018 “Trio undone” - Structured improve for the opening of the new gallery Grundlos Kollektiv. 2018 - “Utopia Mas” Choreograph and perform fo the Crossing of the Stages where judging of the Carnival bands happens in Port of Spain Trinidad. 2018 - “PItch Lake” collaborating with poet Andrea Bagoo to create a unique reaching / dance performance of the launch of his new book of poems , Pitch Lake. Medulla Art Gallery 2018 - “ Fantazia” Performing choreography for the judging stage in Caribana , Toronto , Ontario.

Other Workshops and disciplines

1999 - Starts and in-depth study of Contact Improvisation with Peter Bingham at EDAM (Experimental Dance, Arts and Music). Peter is a second generation of this style and has studied and performed with the creator of this form Steve Paxton. 2007 - Volunteers in Jamaica at the Container Project teaching the community to use computers to create music. For many participants it is their first opportunity to use a computer. 2008 - Invited Back to The Container Project due to funding from Unesco. Together with Mervin Jarman they take the music workshop on a tour of the nation and present the music-making workshop to both rural and urban communities. One of these workshops was held in the Kingston penitentiary. 2009 - Invited as a Guest teacher to the teach dance students Contact Improvisation and Yoga at the Edna Manley College of Dance in Kingston Jamaica. 2011-2012 - "Skin, Flesh and Bones" Jacob teaches a Contact Improve series for the month of May at Studio 303 in Montréal. 2014 - Invited back as a guest lectures to teach Contact improve at Edna Manley during the Rex Nettleford Arts Conference in Jamaica. 2014 - Teaches a master class in Contact Improve at the NCF Dance Summer Internship, Barbados. 2015 - Teaches a master class in Contact Improve at the NCF Dance Summer Internship, Barbados 1996-2016 Third Eye Tribe is a performance platform that has toured across Canada, the USA and Europe playing clubs, underground raves in both warehouses and outdoor events, and collaborating at festivals with world musicians and spoken word artist. 2016-2018 Teaching Contact Improve Dance to the Dance department at UTT (University of Trinidad and Tobago) 2015-2017 Sharing Contact Improve dance classes at the Annual festival New Fire Festival. 2016-2018 Teaching public classes to Contact improvisation at N9 Dance studios.